First I want to appologize that the last post came out unfinished. Thought it was a good Idea to release a post on the first day of trading. I edited the post several times over the day. I plan to not do that again.

As I have written here, Coca-Cola Enterprises, Inc., Coca-Cola Iberian Partners SA and Coca-Cola Erfrischungsgetränke AG, a wholly owned subsidiary of The Coca-Cola Company, have agreed to combine their businesses into a new company to be called Coca-Cola European Partners Plc (CCEP).

The Coca-Cola System or what is a Bottler? The Coca Cola Company (KO) manufactures and sells concentrates, beverage bases and syrups to bottling operations, owns the brands and is responsible for consumer brand marketing initiatives. Coca-Cola bottling partners manufacture, package, merchandise and distribute the final branded beverages to customers and vending partners, who then sell the products to consumers.

The Prospectus can be found on https://www.securitiesinfo.com/ 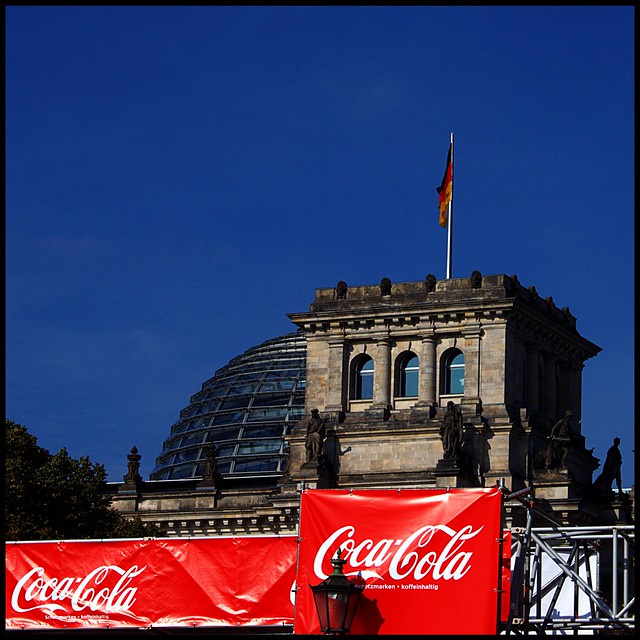 Photo: The German Parliament in Berlin from Bo under CC.

You can find a Interview with Sol Daurella, the new chairwoman of Coca-Cola European Partners, who came from Coca-Cola Iberian Partners (here). Some notes from the Interview:

We are projecting between 315 and 340 million euros in synergies and cost efficiencies.

As a new company, we will start with only a 29 percent market share in value across the region, so we see a lot of headroom.

So the consumer in Europe will benefit from a much greater availability of a wider range of leading brands from The Coca-Cola Company,…

This is my final calculation:

In this calculation I assumed that:

I have not adjusted:

I bought some shares of CCEP. My investment theory ist mostly based on the fact that European Partners is cheaper than Peer Coca-Cola bottlers. Maybe I am loveblind Berkshire-Hathaway Fan who stopps thinking clear when he sees the name Coca Cola. I think the stock will be traded higher in 5 years – but of course I can not know.

As the market has rallied (or at least not crashed) for about 7 years I want to have enough cash arround. We have the Brexit-voting soon and the FED maybe will raise interest rates this year – I want to be prepared for any scenario so I bought just a small position for my portfolio. I am willing to add to the Position if the price will decline while the business-outlook stays the same.

Disclaimer: The content contained on this site represents only the opinions of its author(s). I may hold a position in securities mentioned on this site. In no way should anything on this website be considered investment advice and should never be relied on in making an investment decision. As always please do your own research!